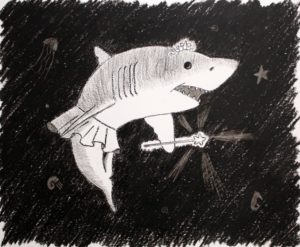 The “Fairy Shark Mother” from my upcoming children’s book.

I’ve decided to put A Penny Dreadful on hiatus while focusing on the children’s book I’ve been writing and illustrating for the past year. I hate to put everything on hold before it’s even reached the real meat of the story (where are the pirates?! I thought this was a pirate comic!!!), but I promise I’ll return to Illustrating Kit, Arlo, and a bevy of as-yet-unrevealed character very soon.

Until then, check out the progress on my children’s book project by following my new twitter feed here!